While substantial gains have been made over the past several decades, women in Canada and around the world are still significantly underrepresented in decision-making processes, are less likely to be employed or participate in the labour force, and have lower average annual earnings than men. Women are also often underrepresented in particular economic sectors and occupations, including cleantech and environmental sectors and occupations. Women held 41% of jobs in the Canadian clean technology sector in 2019, and two thirds of Canadian post-secondary graduates in science, technology, engineering and mathematics (STEM) were male in 2019, with an even greater disparity in engineering and computer science programs and skilled trades. Women are also less likely than their male counterparts to enter and remain employed in STEM occupations, despite studying in the same fields.

Social, economic and environmental issues are experienced differently by women, men, and gender-diverse people due to intersectional factors such as gender identity and expression, race, ethnicity, class, age, sex, physical or mental disability, and many others. In the context of the environment for example, studies have found links between natural disasters, deteriorating mental health, and increases in gender-based violence, especially among women and gender-diverse people. In addition to the different lived experiences of women and gender-diverse peoples, attitudes concerning the environment, biodiversity and climate change also differ along gender lines, which makes equitable representation in environmental governance crucial for ensuring that policies and actions reflect the population.

Addressing societal inequities can increase the capacity of a community or group to prepare for disruptions, recover from unforeseen shocks, and adapt to or manage a disruptive experience. In this regard, Canada's ambitions under the 2030 Agenda to advance SDG 5, notably through efforts to eliminate gender-based violence and harassment, increase gender equality in leadership roles and at all levels of decision-making, and have Canadians share responsibilities within households and families, also increase Canadians' capacities to adapt to and mitigate the impacts of climate change.

Canada is taking domestic and international action to address systemic barriers to equality for all women, girls and gender-diverse people. Gender-based Analysis Plus (GBA Plus) and the Gender Results Framework are two key tools for the Government of Canada to advance gender equality. GBA Plus applies an intersectional lens to all policies, programs, and initiatives, taking into account (but not limited to), identity factors such as sex, gender identity and expression, age, ethnicity, class, religion, sexual orientation, and physical ability. It helps assess and address systemic inequalities and risks experienced by diverse individuals and groups in Canada. The Gender Results Framework is a whole-of-government approach to tracking how Canada is performing on gender equality, defining what is needed to improve equality, and determining how progress will be measured.

The Government of Canada is also working to eliminate systemic barriers to women's participation in federally regulated workplaces. This target is being supported by concrete action. The Government of Canada is working to implement the Pay Equity Act across federally regulated workplaces to address systemic gender-based discrimination in compensation practices and pay systems. Additionally, a review of the Employment Equity Act that seeks to remove systemic barriers to employment will be completed, with a report to the Minister of Labour in fall 2022.

It also plans to amend the Canada Labour Code to provide up to five new paid leave days for federally regulated employees who experience a miscarriage or still birth, and to strengthen provisions to better support working women who need to be accommodated or re-assigned during pregnancy and while breast-feeding. The Government of Canada is also proposing regulations to provide menstrual products in federally regulated workplaces to support and ensure all employees' participation at work, including gender-diverse employees.

The Government of Canada is also showing leadership in promoting gender equality in the federal public service. For instance, it has set a target to ensure that each year the federal public service meets or surpasses the workforce availability for women, Indigenous persons, persons with a disability, and members of a visible minority group (see Goal 10 for more details).

Internationally, Canada supports a number of initiatives that advance gender equality and the empowerment of all women and girls. Canada established the first Group of Seven (G7) Gender Equality Advisory Council, which helps integrate gender equality and gender-based analysis across all G7 themes.

Canada has also taken a leading role in advocating for including gender issues in implementing the United Nations Convention on Biological Diversity. Canada supports the Convention on Biological Diversity's Gender Plan of Action, and actions to advance gender perspectives in the process to develop the post-2020 Global Biodiversity Framework. In addition, Canada is a leader in advancing gender issues in the context of the United Nations Decade of Ocean Science for Sustainable Development (2021-2030), with a particular focus on supporting projects that aim to inspire and empower women in ocean science. 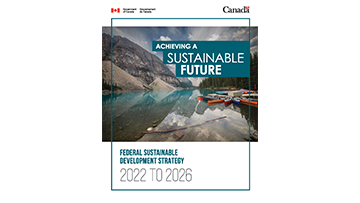